What does CVSA’s executive director think about this year’s Roadcheck results? 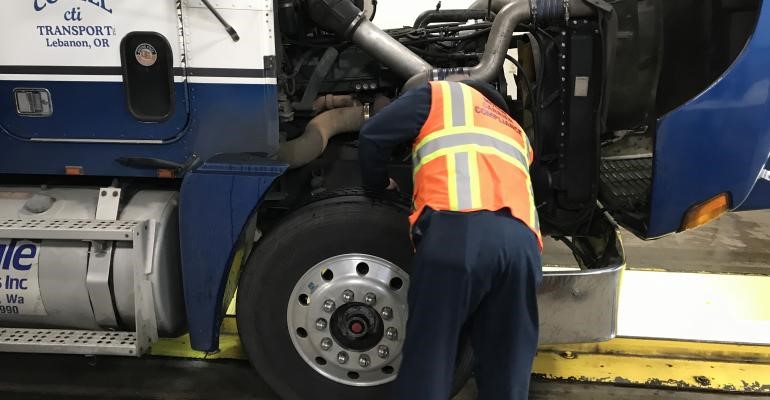 ‘It is important to note these numbers are not reflective of the entire population of transportation safety,’ says Collin Mooney.
For Collin Mooney, executive director of the Commercial Vehicle Safety Administration (CVSA), even one vehicle or driver violation is too many.
So it may seem the results of the 2019 International Roadcheck event showing that 17.9% of vehicles and 4.2% of drivers were put out of service would be a major cause for concern.
During an interview with Fleet Owner, Mooney shared his takeaways from this year’s results, including that it was “good to see the numbers down” from 2018, when 21.6% of vehicles were placed out of service.
The 2019 safety blitz was held June 4-6, and the results were released at the end of August. There were 67,072 inspections in the United States and Canada during Roadcheck, resulting in 12,019 vehicles being removed from the roads due to critical violations, and 2,784 drivers placed out of service for driver-related violations.
“It is important to note these numbers are not reflective of the entire population of transportation safety,” said Mooney.
In many cases, especially during an annual event like Roadcheck, these are targeted inspections based on a variety of factors, meaning that the out-of-service rates are strictly “reflective of those vehicles,” he said.
CVSA’s Collin Mooney has 30 years of experience in transportation safety. He began his career in Canada with the Saskatchewan Highway Transport Patrol.
If Roadcheck was more of a “scientific study,” with every third vehicle being inspected, for example, the results would be “drastically different,” Mooney stressed.
Mooney said as advanced thermal imaging, weigh-in-motion systems and mobile scanning technologies improve, it becomes all the more likely these targeted inspections of vehicles and/or drivers will uncover an existing problem.
“This is an effective use of resources,” Mooney said. It also means out-of-service rates from these inspections could increase, even though at the same time overall safety efforts across the industry may be improving.
The biggest problem discovered during Roadcheck involved braking systems, totaling 28% of the vehicles out-of-service violations. That was followed by tire and wheels (19.3%), brakes adjustment (17.1%), cargo securement (12.2%) and lighting devices (11.5%).
Mooney touted the safety and performance of disc brakes, saying they offer a “tremendous improvement” over drum brakes.
Disc brakes are common in Europe, and while they are gaining in popularity in the United States, Mooney said it will still be years before they are on 100% of domestic trucks.
As for driver results, 37.2% of the out-of-service violations involved hours-of-service irregularities. That was followed by wrong class of license (22.5) and false logs (14.7%). There were also 748 seat belt violations.
Mooney strongly cautioned against reading too much into the HOS issues. He blamed the figures on confusion related to the continued transition from paper logs and automatic onboard recording devices to electronic logging devices.
As of Dec. 16, nearly all interstate carriers will be required to use ELDs, the final phase-in of a federal mandate many years in making.
Mooney said it will still be a few years before inspection results can more accurate determine well drivers are complying with the ELD mandate, as well as any potential changes to HOS rules.
He added Mooney said he was not overly worried by the disparity between the 17.9% out-of-service rates for trucks and the 5.7% rate for motorcoaches during Roadcheck.
“There is more scrutiny hauling people than hauling cargo,” Mooney said.
He noted there are far fewer motorcoach inspections during Roadcheck, compared with truck inspections. Many states regularly conduct enforcement programs targeting buses, with inspectors often holding safety checks at depots where large amount of passengers are loaded and offloaded.
These companies and drivers are “more in tune” when it comes to regular maintenance, even on issues that are perceived as minor.
This sense of additional awareness can also be seen in the results involving vehicles transporting hazardous materials/dangerous goods. The out-of-service rate was 13.7% for these vehicles and only 1.4% for drivers, significantly lower than the overall truck results.
While truck and bus drivers need to always be prepped for an inspection, it is more likely to happen during CVSA’s Brake Safety Week, planned for Sept. 15-21.
Inspectors are expected to put a special emphasis on brake hoses and tubing, which CVSA said are particularly important “to vehicle mechanical fitness and safety.”
When asked about the upcoming event, Mooney emphasized the goal of the week is not to put as many commercial vehicles out of service. Instead, a major component is public outreach and education on proper maintenance through information kiosks at rest stops and other locations.