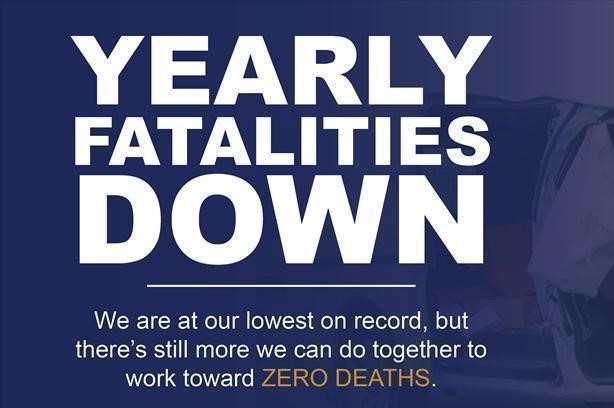 Roadway deaths and especially speeding fatalities fell in 2018, according to NHTSA data.
Highway fatalities decreased by 2.4% last year, dropping from 37,473 lost lives in 2017 to 36,560 deaths in 2018, according to the National Highway Traffic Safety Administration.
With 913 fewer fatalities, 2018 marks the second consecutive year of reduced crash deaths nationwide.
The fatality rate per 100 million vehicle miles traveled also declined from 1.17 in 2017 to 1.13 in 2018, representing a decrease of 3.4% and the lowest fatality rate since 2014.
The data, complied by NHTSA’s Fatality Analysis Reporting System, includes additional positive trends, indicating that the safety message is taking hold.
For example, roadway deaths among certain vulnerable road users are going down. In 2018, fatalities among children 14 and younger declined by 10.3% and motorcyclist deaths dropped by nearly 5%.
There is evidence of progress with two key roadway behavior hazards as well. Speeding-related fatalities declined 5.7% in 2018 and lost lives due to alcohol-impaired driving dipped by 3.6%.
On the downside, fatalities among pedestrians and pedalcyclists rose in 2018, increasing by 3.4% to 6,283 deaths and 6.3% or 857 lost lives, respectively.
Moreover, approximately 100 people a day still die on the nation’s roadways, notes the National Safety Council.
However, overall, the agency believes the FARS 2018 data reveals improved roadway safety.
Moreover, NHTSA also released initial estimates for the first half of 2019, indicating that the overall positive trend may be continuing.
The estimated number of fatalities in the first half of 2019 decreased by 3.4% from the same period in 2018, with 589 fewer lost lives over that time. That translates to an estimated first-half 2019 fatality rate of 1.06 – the lowest first half since 2015, notes the agency.