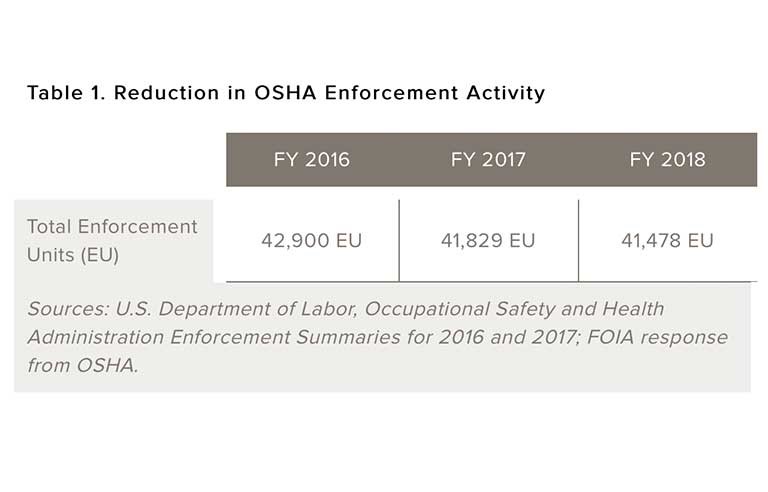 OSHA enforcement activity “continues to decline” under the Trump administration, according to the National Employment Law Project, citing the agency’s own metrics. The advocacy group also claims that OSHA’s fatality/catastrophe investigations climbed to their highest level in a decade in fiscal year 2018.
In a data brief issued March 14, NELP states that enforcement units in OSHA’s Enforcement Weighting System, which places values on certain types of inspections to measure enforcement activity, dropped to 41,478 in FY 2018 from 41,829 in FY 2017, according to information obtained through a Freedom of Information Act request. That decrease follows a larger drop from 42,900 enforcement units in FY 2016, when OSHA implemented the statistic.
The agency, however, ended a four-fiscal year decline in overall inspections in FY 2017 with 32,408, but that turnabout was a relatively modest increase from 31,948 in FY 2016. Virtually all of that increase came from an uptick in programmed inspections (14,377 – up from 12,731), data posted on OSHA’s website shows.
In an email to Safety+Health, a Department of Labor spokesperson defended the agency’s performance.
“OSHA has performed more than 32,000 inspections in both fiscal years 2017 and 2018, surpassing the final year of the previous administration,” the spokesperson wrote. “The FY 2017 and FY 2018 increase occurred despite the suspension of inspections in many areas of our nation due to hurricanes, fires and other natural disaster recovery efforts.”
Fatality/catastrophe investigations decreased to 837 in FY 2017 from 890 in FY 2016, but jumped to 929 in FY 2018 – the highest level since FY 2008, NELP states.
“The latest data from OSHA is very alarming,” Debbie Berkowitz, program director for worker safety and health at NELP and a former senior official with OSHA, said in a March 14 press release. “We’re seeing huge red flags in the continued drop in enforcement and staffing at OSHA, while the number of workplace fatality investigations is at a decade high.”
The DOL spokesperson pointed to a drop in workplace fatalities to 5,147 in calendar year 2017 from 5,190 in CY 2016, citing Bureau of Labor Statistics data. However, FY 2018 includes only the final three months of CY 2017.
NELP states that OSHA had a record-low 875 compliance safety and health officers as of Jan. 1, compared with 1,016 in 2010. The agency hired 76 new officers in FY 2018, the DOL spokesperson noted. Further, the administration’s FY 2020 budget proposal for the department seeks to add another 26 full-time equivalent officers.
Former OSHA Deputy Assistant Secretary Jordan Barab, however, pointed out in a July post on Twitter that getting that personnel up to speed takes considerable time.
“Not only the slow federal hiring process, but medical exams,” Barab tweeted. “Then three years of training before they’re fully qualified.”

Good Catch or Near Miss? Why the Answer Matters