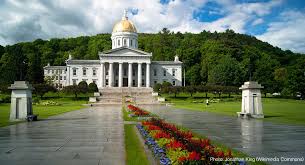 AGC/VT recently attended a stakeholder workshop for the Transportation Climate Initiative (TCI). TCI is a regional collaboration of Northeast and Mid-Atlantic states including Connecticut, Delaware, Maine, Maryland, Massachusetts, New Hampshire, New Jersey, New York, Pennsylvania, Rhode Island, Vermont and Virginia. The purpose of the program is to improve transportation, develop the clean energy economy and reduce carbon emissions from the transportation sector. Transportation is statistically the highest source of carbon emissions in Vermont and is one of the factors scientists suggests cause global climate change.
TCI is modelled by the Regional Greenhouse Gas Initiative (RGGI) which puts a cap on the amount of carbon emissions from power generation. RGGI uses a “cap and invest” program for the power supply companies who are “capped” at a predetermined level but can buy additional capacity in an auction. The monies from the auction are then distributed to the states involved which can choose what programs to allocate the funds. TCI would similarly “capping” transportation fuel sales and has a similar auction/invest program. Some may simply refer to this as a “carbon tax”.
The “caps” for the TCI program would be administered to the source of fuels, and auction allocations would be purchased for additional allocation. It is estimated that there would be a 30-cent fee on each gallon of fuel. Although the consumer would pay the fee, they won’t see it similarly to other fuel taxes because it will occur at the source of the fuel and not at the pump. These monies would be distributed to the states and Vermont is estimated to capture between $20-50 million per year from the program. It should be noted that this “carbon tax” would not apply to home heating fuels, non-transportation fuel such as heavy equipment, and generators.
There is concern that this carbon tax would have a negative effect on businesses who rely on transportation to deliver product and/or services. Currently AGC/VT is working with our business groups and state representatives to find solutions that would not cause a hardship for business. For example: exempting diesel. In addition, we are working with the state on how those funds would be spent if enacted when they return to Vermont. Specifically, AGC/VT will be focusing on the funds going towards the transportation budgets and other projects with a nexus to the taxation rather than general fund programs. The appropriation of these funds will be extremely competitive, and your association will work hard to make sure that if TCI comes to pass that not only will the monies be responsibly raised, but also responsibly spent on projects the fund is intended for.
If there is anything you would like to obtain more information about please contact Matt Musgrave, Matt@agcvt.org or (802) 223-2374.