0
535 Views
Every year it’s different, and this year was special. The Capitol Christmas Tree made its way east from Oregon’s Willamette Valley to its appearance last week in Independence, MO, on a reverse route marking the Oregon Trail-it’s 175 years since 1,000 settlers in wagons headed west in the Great Migration of 1843. 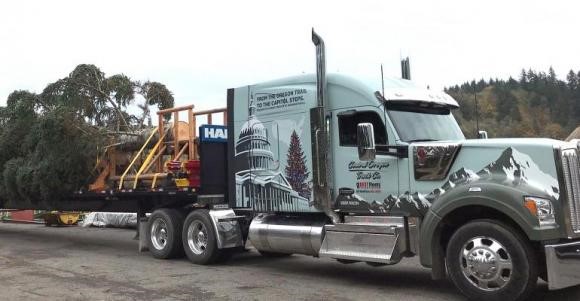 From Independence, which was a gathering point for those large-wheeled wagon trains, the tree then made a stop in St. Louis before continuing on through Ohio and into Maryland. The tour this year-you might call it the “Reverse O.T.”-brought the tree from Oregon to Idaho, Nebraska, Wyoming, Kansas, and now Missouri.
All told, the tree will have traveled nearly 3,000 miles when it reaches the U.S. Capitol in a few days. It’s a special trip that’s taken a special truck: the brand-new Kenworth W990 pulling it on a flatbed trailer came from The Papé Group, a major sponsor of the tree’s tour this year.
Doing the honors hauling the tree was Central Oregon Truck Co. (COTC). Rick Williams, the company’s CEO, Phil Taylor, VP of maintenance, and Driver Safety and Services Director Brad Aimone piloted the Kenworth along with other COTC drivers. The flatbed carrier hauls freight across the 48 continental states and Canada.
This is the 54th Capitol Christmas Tree, a.k.a. “The People’s Tree.” Of the six trees that the Oregon Forest Service nominated this year, a Noble Fir was chosen-the same as the very first of these in 1964. This 80-ft. fella came from Willamette National Forest and was prepped/ protectively packaged in Sweet Home, OR, which included getting a 200-gal. water bladder to keep it hydrated along the way. 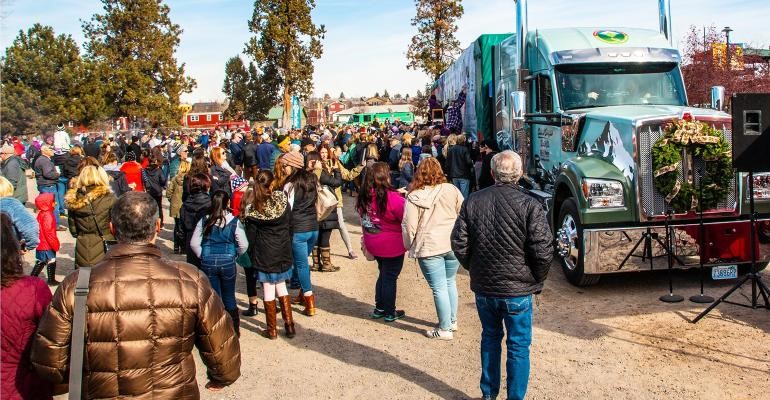 The Kenworth W990 that hauled the tree has special graphics with a Christmas tree next to the U.S. Capitol and reading “From the Oregon Trail to the Capitol Steps.” The Kenworth has a 76-in. mid-roof sleeper, Paccar MX-13 diesel rated at 455 hp. and 1,650 lbs.-ft. of torque, and 12-speed automated transmission. Inside, it’s Limited Edition-this truck got the works.
This is the fifth consecutive year Kenworth has provided one of its new trucks to transport the tree. “We’re not just moving a tree, we’re celebrating tradition and kicking off the holiday season by transporting a tree specifically selected to stand tall outside the U.S. Capitol building,” said Kurt Swihart, marketing director at Kenworth.
“It’s why so many people come out to view the tree along the route,” he added. “It’s special.”

Distracted driving could be solved for fleets with a simple technology

How to Prepare a Winter Emergency Car Kit