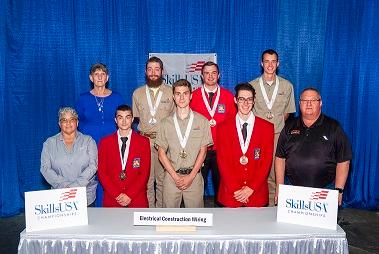 During a hot and sticky week in June, thousands of students from Technical High Schools and Colleges from around the country, convened in Louisville, Kentucky for a week of competitions and leadership training. The SkillsUSA National Competition gives students who have already proven themselves as the best in their home state, a chance to test their mettle against the best of what the rest of the country has produced. “SkillsUSA is a nonprofit partnership of education and industry intended to strengthen our nation’s skilled workforce. Driven by employer demand, SkillsUSA helps students develop necessary personal and workplace skills along with technical skills grounded in academics. This SkillsUSA Framework empowers every student to succeed at work and in life, while helping to close the “skills gap” in which millions of positions go unfilled. Through SkillsUSA’s championships program and curricula, employers have long ensured schools are teaching relevant technical skills, and with SkillsUSA’s new credentialing process, they can now assess how ready potential employees are for the job. SkillsUSA has more than 360,000 annual members nationwide in high schools, colleges and middle schools, covering over 130 trade, technical and skilled service occupations, and is recognized by the U.S. departments of Education and Labor as integral to career and technical education.” From SkillsUSA Website.

This year, Green Mountain Technology & Career Center was represented by three State Champions.  Shawna Beattie, from Morrisville, was a student in the Creative Media Art & Design program who competed in Photography.  Jesse Hill, from Jeffersonville, was a student in the Electrical Technology program who competed in Electrical Construction Wiring. Hunter Michaud, from Hardwick, a Heating, Ventilation, & Air Conditioning student, competed in the competition of the same name.
These three students spent the week networking with other students from across the country, as well as professionals in their industries.  They also were given the chance to see the sights and visit the local amusement parks. The week was not full of fun and games however. Each contestant was given both written and oral exams about their trade and industry, but the real action was the skills tests. Shawna was given a topic to create a series of photos to reflect the theme of “juxtaposition”. Hunter had to demonstrate his skills in soldering. Jessie had to demonstrate his wiring skills both in residential and commercial settings. The electrical competition took several days to complete.
We finally caught up with Jesse, as he has been quite busy with work since he has been back in town. Coming out of the first day of competition, Jesse said, “I felt pretty confident. I was way ahead of the other competitors and I could see some mistakes they were heading into.”
By the end of the competition, he was right. Jesse walked away with the championship. With the gold medal comes not only bragging rights for Jesse, his instructor Dana Jourdan and Green Mountain Technology & Career Center, but also thousands of dollars worth of tools. “I am pretty sure I won’t need a thing for quite some time. There is a lot of stuff in these boxes. Milwaukee Power Tools, and an abundance of hand tools I will use for a lifetime! I am so thankful to Green Mountain Tech especially my instructor Dana Jourdan. ” Jesse came to Green Mountain Tech his sophomore year and enrolled in the Pre-Technology program.  While in the Pre-Technology program, Jesse explored the other programs at Green Mountain Tech and then applied for the Electrical Technology Program for his junior year.  After a successful junior year in the Electrical Technology program, he participated in Green Mountain Tech’s Cooperative Education program, and worked as a second year electrical apprentice with Peak Electric and then later for Local Electric, where he currently still works and is now a third year apprentice.
Jesse took advantage of the opportunity to attend Green Mountain Tech. He is part of the solution Lamoille County and Vermont needs to the problem of finding skilled workers. Nearly every trade in the area is facing a crisis of not being able to find quality help. Many companies are scaling back the amount of jobs they are taking on because they are short handed. Green Mountain Technology & Career center is not only producing the skilled workers these industries need, they are producing champions.

Who Will Own Your Business After You?