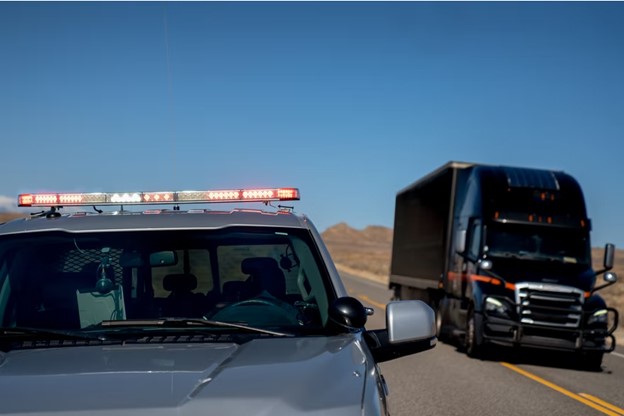 Inspections/violations trends for 2022 show clearly what the COVID-19 pandemic did to state and federal roadside inspection programs, according to a decade-long annual CSA's Data Trail investigation by CCJ's sister publication Overdrive.

With very few exceptions, inspection numbers took a nosedive in 2020 as law enforcement departments and truckers themselves sought to limit person-to-person contact. Some states continued that trend in 2021, perhaps to the delight of fleets and drivers seeking further relief from the risk of this one of a myriad potential delays to any haul.

Longtime independent Mike "Mustang" Crawford noted he'd been inspected just a single time since the COVID-19 pandemic began, in Arizona, where a minor, and questionable, violation was encoded as a result for his computer equipment and toolboxes' supposed obstruction of his view forward and to the right out of the windows. Aside from that, "I have gone through areas where they’re famous for inspecting you," he said, including "certain places in Texas, the super-coop in Illinois on I-55 north of St. Louis, north of Springfield on the southbound side of I-55," and many others, without a pull-in to speak of.

Understand your inspection risk with these national rankings for inspection intensity, highly variable across the United States, as well as where an inspection is most likely to result in a violation in this report from the editors of Overdrive and CCJ in partnership with sister data company RigDig.

Generally, it seems states across the board "haven’t been inspecting that much," Crawford added.

Longtime inspection-intensity leader California, conducting more inspections per lane-mile of National Highway System than any other perennially, showed continued decline in overall inspection numbers. Jaime Coffee, spokesperson for the California Highway Patrol, noted challenges out West "in staffing of both uniformed and nonuniform personnel" over the last few years.

Captain Josh Barnes, of the Commercial Vehicle Enforcement Division of No. 2 inspection-intensity leader Maryland, put a finer point on that, even urging Overdrive to share the Maryland State Police's "MSP Careers" website. His division alone currently operates with 35 vacancies, 10 sworn and 25 civilian truck inspectors not working full-time on inspections.

"There’s a definite loss of manpower in every jurisdiction, though some states are doing a little better than others," said Chris Turner, the Commercial Vehicle Safety Alliance's director of enforcement data and judicial outreach to state/federal enforcement departments and industry.

Increased funding for state programs, funneled through the Federal Motor Carrier Safety Administration's big payday via last year's infrastructure legislation, will certainly be available, Turner added. Yet when it comes to truck-inspection-specialized personnel, "when you lose people ... it takes years to build back up. It takes years to school them up," particularly when it comes to vehicle-related inspection levels.

In addition to California, indeed most other states have also taken a step back from pre-pandemic inspection levels, though Maryland, close on California's heels in terms of inspection volume per lane-mile, performed more inspections in 2021 than in 2020. Maryland's inspection levels year to year more closely resemble the national trend.

It's not just staffing issues that have contributed to the decline in inspections since the pandemic, though. Other factors include, according to Captain Barnes, the simple fact of such a large portion of a formerly commuting general-public workforce now at home, recognizing the work that goes on in the neighborhood on a daily basis, requiring manpower reallocation to an extent. "We had a huge influx of traffic complaints, exhaust complaints," and more, Barnes said. "They hadn't noticed the truck traffic" before home working 24/7.

The surge of New Entrants with "Great Resignation" dynamics throughout, too, necessitated a reallocation of significant portions of the force away from roadside and fixed-location inspections and to New Entrant audits. "I'd like to say that was just a surge, but I think it's now a trend," Barnes said, with at least some measure of staying power.

Understand your inspection risk with these national rankings for inspection intensity, highly variable across the United States, as well as where an inspection is most likely to result in a violation in this report from the editors of Overdrive and CCJ in partnership with sister data company RigDig.

Outside of Maryland, national inspection numbers were bolstered in 2021 by a bevy of relatively low-intensity and/or smaller states – Alabama, Connecticut, Delaware, Maine, Michigan, Mississippi, Rhode Island, Wyoming – where 2021 levels were actually above those seen pre-pandemic. Another such state, North Carolina, has boosted its own numbers by almost 12% since 2019, rising up the inspection-intensity rank to a tie with New Mexico for No. 3.

That's in part due to efforts through recent years of the state Highway Patrol's Commercial Vehicle Enforcement Section to "train additional personnel to assist with conducting more roadside inspections," said First Sergeant Travis Ingold. "Specifically, our instructors have trained and certified additional sworn and civilian members outside of our section but within our agency to conduct Level 3 Inspections," or the driver-only variant of CVSA's uniform inspection levels.

That fact, Ingold added, "would most likely explain the increase in inspections conducted." For what it's worth, Maryland's 2021 decline compared to 2019 coincides with a re-emphasis on comprehensive Level 1 inspections, certainly more time-consuming than the driver-only Level 3.

Level 3 inspections represent less of a delay for fleets, too, of course, given they exclude the equipment-related portion of the Level 1 and others. And at least in North Carolina, there's evidence that a great many of those additional inspections are ending with no violation incurred. North Carolina now ranks No. 2. for its high percentage of so-called "clean" inspections – almost 7 in every 10 conducted there in 2021 were violation-free. It hasn't always been that way. As recently as 2016 about half of North Carolina inspection reports concluded with a violation of some kind, that percentage falling quickly in 2017 and 2018 to where it sits today.

Ingold noted the state now "emphasizes the importance of conducting an inspection for every Commercial Motor Vehicle stopped, whether it is a random safety inspection or an inspection resulting from a traffic violation."

Such a view could well be one adopted more readily nationwide. The trend in clean inspections is up considerably long-term – in the early days following FMCSA's launch of the Compliance, Safety, Accountability program in 2011, for instance, just around 38% of all inspections were violation-free.

Over the long term, CSA has ushered in something of a culture shift in law enforcement, said CVSA's Chris Turner, formerly of the Kansas Highway Patrol. He was speaking to law enforcement's recognition of the growing importance of every inspection, and every violation, to the motor carrier community. That's translated to "these days, [law enforcement] folks on the road have a much better acceptance that they may not have done something right." Turner was speaking specifically about the DataQs program and the profusion of carrier challenges to particular violations – a process whose now routine nature has helped bring about the culture shift.

"It’s taken a good 10 years," but for most officers today a DataQs request for review of an inspection, violation or crash doesn't feel like "a challenge to their authority anymore," just a routine matter whose importance is recognized. The possibility of error, of course, carries with it negative implications for any trucking business.

In Maryland, a real reckoning with this recognition started with COVID itself, which prompted a reassessment of the inspection program at a high level. It's become a part of official quality-assurance policy and procedure, said Captain Barnes. Officers in the truck-enforcement division refer to it as the "pre-DataQs plan," whereby internal staff conduct reviews of inspections/violations with the intent of catching inspector mistakes and correcting them before carriers even have an opportunity to engage the DataQs system.

"We do a randomized internal audit every month and correct our own inspections and send them out to carriers," Barnes said. Before the program rolled out post-COVID, the department's DataQs correction rate was on the order of 70% of DataQs reviews acted upon and "overturned" in the carrier's favor. Now, "we're well before the 40% mark, in lower 30s," Barnes added, and if you exclude inspection-related requests where the wrong carrier was assigned, almost always corrected, "we went from 39% overturned to just 8%."

The department's now rolling that process out to state and local partner agencies.

Yet CVSA's Turner well knows DataQs reviews don't always work seamlessly, though, as issues have continued to bedevil motor carriers in some jurisdictions. Recognition of the importance of every inspection, whether a violation is uncovered or not, too, is by no means universal among state enforcement departments. State-by-state percentages of violation-free inspections range from 14.5% on the low end (Iowa) to more than 70% on the high end (Mississippi).

Among high-inspection-intensity states, interestingly, three of the top five – California, New Mexico, North Carolina – also rank in the top 10 for most clean inspections. On the flipside, so do two of the most violation-prone states (Texas and Indiana) shown in the heatmap below charting violations per inspection by state for 2021. (Find full 48-state rankings in all these categories, and more, by downloading the 2022 CSA's Data Trail update at this link.)

Among violation categories in this year's CSA's Data Trail analysis, there's evidence, too, more states like North Carolina may be prioritizing driver-only Level 3 inspections. Though high variation in violation priorities between states generally is the rule when it comes to inspections, the national trends for vehicle violations in the big brakes, lights and tires categories are all down. Moving violations -- often the initiation for a traffic stop and accompanied by a Level 3 driver inspection -- were up in both 2020 and 2021, years in which speeding on the nation's roadways has been flagged as a national concern with increasing crash fatality numbers.

The trend's well evident in spite of what CVSA's Chris Turner said is, at least anecdotally, a rise in "hesitation for traffic stops out there" among officers, given rising negative viewpoints around law enforcement in segments of the wider public. Bad actors well know "there’s fewer inspections going on," Turner said. Supply-chain issues have put many in a hurry, too, and he guesses some make the calculation it's cheaper to eat the violation and "pay the ticket" in the event of being discovered as a speed scofflaw.

"People are just driving more aggressively," Turner added, pointing to both the wider public and working haulers, too. "You can probably see it out there on the roads – crashes are up by any metric you measure. Bad actors are not immune to any of that." The true professionals, though, he knows, the "good drivers, they're still doing it right."

Speaking frankly, owner-operator Crawford hopes states, too, smooth out staffing problems in hopes to address a perennial ask of his. He's long attempted to convince Missouri officials to grant him a voluntary inspection to satisfy the requirement for an annual. A knowledgeable officer, he said, is worth every bit of maintenance you might do as a result. "They're much better than most any inspection you can pay for," he said.