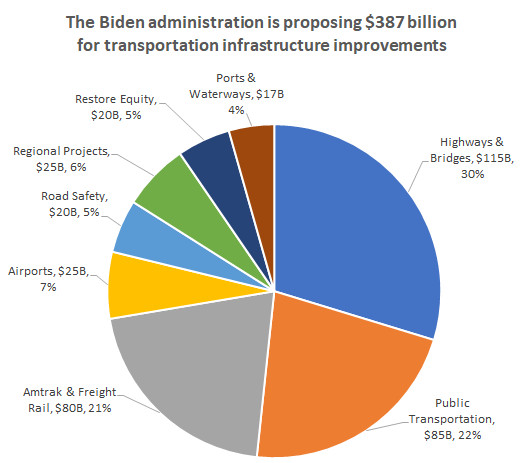 What’s happening: President Joe Biden today is proposing $387 billion for transportation infrastructure improvements during an event in Pittsburgh. The American Jobs Plan (AJP) is billed as a way to rebuild the nation’s infrastructure systems while generating employment and economic growth. It includes investment beyond transportation infrastructure such as broadband, school construction, and drinking water. Climate change and “racial equity and environmental justice” initiatives are also woven into the funding and policy proposals.

What’s included: ARTBA President and CEO Dave Bauer participated in a White House briefing on details of the plan, which includes:

Pay-fors: The administration’s accompanying Made in America Tax Plan proposes to increase the corporate rate from 21 percent to 28 percent. The administration suggests this would pay for the $2 trillion infrastructure investment over 15 years. Other corporate tax changes including eliminating loopholes, increased enforcement, and modifying deductions would also help pay for the plan.

ARTBA’s take: Presidential proposals are rarely acted on as is by Congress, and how the AJP dovetails with a new surface transportation reauthorization law due Sept. 30 is unclear. “The most important thing is not whose plan passes Congress, but that at the end of the process the American people have increased mobility and the competitiveness of the U.S. economy is strengthened,” Bauer said in a release.

The House and Senate are each working on their own bills with committee action expected in May. Whether some AJP proposals are combined with a surface transportation package remains to be seen. Republican leadership has signaled opposition to the plan, particularly regarding corporate tax reform as a pay-for. ARTBA will continue advocating for increased investment in transportation infrastructure programs regardless of the legislative vehicle.