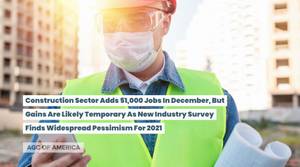 Few Construction Firms Expect the Industry to Recover to Pre-Pandemic Levels Anytime Soon, While Demand for Most Types of Projects is Likely to Fall amid Growing Project Delays and Cancellations

Construction employment increased by 51,000 jobs in December, with gains for nonresidential as well as residential contractors, according to an analysis by the Associated General Contractors of America of government data released today. Association officials cautioned, however, that its latest survey shows widespread pessimism among contractors about the volume of work available in 2021, and they urged lawmakers to focus on measures designed to rebuild the economy and demand for construction.

“December’s employment gains likely reflect milder weather than usual for the month rather than sustained demand for projects,” said Ken Simonson, the association’s chief economist. “In fact, our survey found contractors expect the volume of work is likely to decline for nearly all nonresidential project types, and most firms have experienced project cancellations or postponements.”

Construction employment climbed to 7,413,000 in December, an increase of 0.7 percent compared to November. However, employment in the sector remains down by 226,000 or 3.0 percent since the most recent peak in February.

Unemployment in construction nearly doubled in 2020. The industry’s unemployment rate in December was 9.6 percent, compared to 5.0 percent in December 2019. A total of 930,000 former construction workers were unemployed, up from 489,000 a year earlier. Both figures were the highest for December since 2013.

The association’s 2021 Construction Hiring and Business Outlook Survey found that 78 percent of contractors reported a project had been canceled or postponed, while only 25 percent reported winning new or additional work as a result of the pandemic, the economist noted. He said that suggests many firms will have to lay off employees once current projects wrap up. The survey included responses from more than 1,300 contractors that perform all types of construction other than homebuilding.

Association officials urged the new Congress and incoming Biden administration to enact measures to boost investments in all manner of public infrastructure. They added that Washington needs to backfill depleted state and local construction budgets so those new federal infrastructure investments can be more effective in boosting demand and construction employment.

“As Washington officials pivot from providing pandemic relief to focusing on rebuilding the economy, infrastructure needs to be at the top of their agenda,” said Stephen E. Sandherr, the association’s chief executive officer. “There is a real chance to come out of the pandemic with a stronger and more efficient economy if we can act now to rebuild aging and over-burdened infrastructure.”