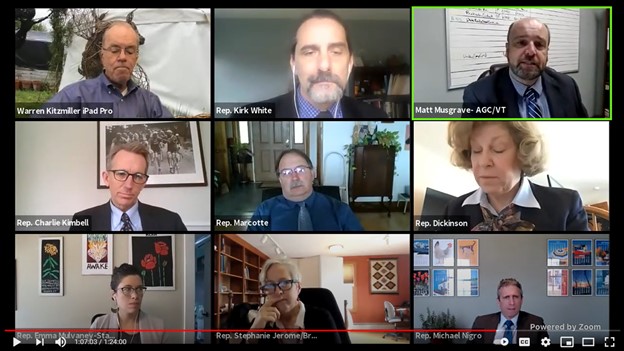 Before we get to politics: during Tuesdays address by Governor Phil Scott he announced the reinstatement of the work search requirement for all employees except those sick with COVID or dependent issues. This came as a great surprise to the AGC/VT lobbying team who has been working diligently to get this reinstated. Vermonts Department of Labor had been engaged with us for months on this issue, and by the end of the day Monday we all believed that the work search requirement may not come back until July or further. We were shocked when the Governor said May 9th it returns. This is a huge step towards getting hold outs on unemployment back to work.

It is becoming clear in the last week of April that the legislature has realized they are running out of time if they plan to adjourn before the end of May. We are seeing longer floor sessions, hurried committee work and different factions working hard to make sure their policies make it through. With many non COVID-19 related bills starting to get committee time its clear the legislature is looking to "get back to normal"...

H.157 which had stalled in the Senate which would create a registration system for residential building contractors has made it out of the rules committee and been assigned to Senate Economic Development. The committee is expected to consider whether to reduce the threshold of $3,500 per contract rule that would trigger registration requirements down. The original iteration of this bill from the prior bienium had a threshold of $1,000 per contract when it came out of the Senate the got mired in the House. AGC/VT has successfully been able to keep subcontractors who contract with a general contractor exempt from the program and believes the registration system could improve challenges home builders have with employee misclassification issues. By registering as a business they are taking steps towards accomplishing the third rule in the "ABC" test which states "Such individual is customarily engaged in an independently established trade, occupation, profession or business" used by the department of labor to determine misclassification cases.

AGC/VT testified on a bill that would create a grant program to cover moving expenses to attract workers to Vermont. One part would offer a $5000 grant to people relocating to Vermont to perform remote work for an out of state employer. AGC/VT got involved to support the bill because it offers a $7500 grant to people relocating to work in the state of Vermont. It could be a good tool for Vermont contractors to use to attract talent from neighboring states and beyond in their messaging. As the bill is passed and rolls out members will be updated with the specifics they can advertise in their recruiting.

S.10 the bill that would extend certain unemployment provisions during COVID-19 which passed the Senate has now been taken up in the House Committee of Commerce. As of the end of the week labor advocates were pushing for increased benefits and industry advocates were pushing for a "2020 fix".... The House committee released a strike all ammendment to the Senate bill on Thursday and began taking testimony from VTDOL. The strike all removed a benefit increase and replaced it with an indexing average wage/benefit that would tie unemployment benefits to the average wage increases but keep benefits at 57% of original pay. The strike all also removes a study and rate increase deferral to be replaced by a true "2020 fix" that forces the calculation that creates the trust fund goal to ignore the year 2020. This single change could save employers $400 million over the next 10 years in unemployment insurance premiums. The bill is expected to pass out of committee but may encounter some floor ammendments and certainly will be in a committee of conference with the Senate.