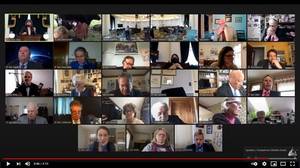 After the first thunderstorm of the season which did include a category EF 1 tornado touching down in Middlebury caused the Vermont Senate to adjourn prior to passing S.10 they returned on Tuesday and passed out the bill. The bill passed out with no real fix to the "2020 problem" which will increase unemployment insurance premiums and added another benefit for parents of $50/week. Other parts of the bill extend the employer experience rating relief, create a trust fund study and defers by two years the increase in premiums. The business groups including AGC/VT made enough of an impact that several Democrat Senators voted against the bill. Those included the chairs of powerful money committees which indicates changes made in the House will be better received. AGC/VT will continue to push for a real "2020 fix" and to find another way to address struggling families than use unemployment funds.

Another hot topic your association has been tracking is the return to work search exemption due to COVID-19. AGC/VT pressed representatives of Vermonts Department of Labor to end the exemption because its inhibiting the ability of an employer to recall staff on seasonal layoffs. AGC/VT has been receiving reports from members that are experiencing either total refusal to return to work or attempting to negotiate scaled back hours so they can receive the Federal $300 unemployment benefit so they could make more per week than full time. According to DOL these are both examples of fraud and should be reported. According to Commissioner Harrington when an employer officially reoffers a laid off employee their job back or a similar job/pay the employee needs to return, or the employer should notify DOL then they will prosecute for fraud and end payments. AGC/VT has since doubled down on ending the work search exemption on two points. First, if an employer is responsible for enforcing this and threatens an employee that they will be reported for fraud, the employers relationship with that employee will forever be impacted assuming the person doesn't quit to find another employer. Second, the people on unemployment may not understand that UI fraud is a crime because "everyones doing it" and we don't want to criminalize Vermonters for no good reason. We understand that admin will be lifting the work search exemption soon although there is no set time.

The residential contractor registry bill H.157 has been hung up in committees in the House but will return to the floor for a vote on April 6th after negotiations are complete. Still being debated in committee is increasing the threshold that would require a contractor to register from $2,500 to $3,500. There were attempts to remove contract provisions and minor language adjustments. The bill will likely pass the House and the Senate is likely to approve any changes.

The week was not without controversy. The Senate Economic Development committee made headlines this week during a discussion on the unemployment system. After a brief discussion Senator Alison Clarkson asked about the Houses position on "link up" language from the Federal government related to unemployment insurance taxes. Chairman Michael Sirotkin the questioned whether they should go offline to discuss "strategies to deal with the House" and Senators agreed. Next the chair asked that the broadcast of the meeting end immediately. Obviously, we don't know what happened next! It has been reported today that Senate Pro Tem Becca Balint who also sits on the committee called it "inappropriate" and has contacted committee chairs to reinforce the need for transparency.