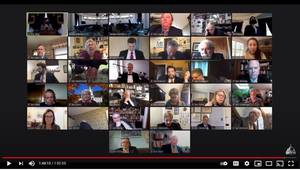 The moment the lights went out..

Front and center this week was the discussions surrounding bill S.10 which was originally introduced to extend certain unemployment provisions due to COVID. As reported in previous weeks the bill expanded and two additional benefits were added with no real relief to employers who were facing a 60-300% rise in their unemployment insurance premiums. Despite massive efforts by over 20 business organizations the committee doubled down on one of the benefits which would add a $50/week child benefit but did not address key concerns of the business community. The main concerns are a fix to the "2020 problem" which due to the amount of the draw from the UI trust fund would require the fund to double to $1 billion keeping taxes high and getting employees back to work. The Senators believed that a 2 year deferral of the rate increase would be a fair trade for the benefit addition and included a study about creating a trust fund goal.

The AGC/VT Government Affairs committee, AGC/VT Board members and VIECA Board members met early in the week to take a position on the bill. They resolved that since the bill does not fix the "2020 problem" and does not address the return to work search requirement that had been lifted that the association would oppose the bill. While seemingly generous pushing out payments two years would not be an actual benefit due to the "2020 problem". After doing the math with the Vermont Department of Labor we quickly realized that large companies with high experience point ratings would only see less than 1% change in their payroll costs, and saving that for two years (to be mortgaged out beyond 2030) in return for additional benefits did not make sense.

A group of over 30 contractors, a dozen legislators and members from Vermonts Department of Labor met for a forum on Thursday to discuss challenges and possible solutions to the unemployment challenges. At the forum members expressed the need to have a fix for the "2020 problem" and find a solution to get people back to work. They were assured that leaders are working towards a 2020 fix and said that employers now can call back those laid off and if they refuse they can be reported to DOL who will pursue them for fraud. Members expressed frustration with the fact that the state would expect them to enforce the return to work requirements for two reasons. First, making the employer pursue an employee, threaten them and possibly report them would strain if not ruin the relationship between the employee and employer. Second, the employees who are laid off do not understand that taking advantage of the COVID unemployment system is fraud so without proper state assistance we are criminalizing our staff which for some can be family. The meeting went well beyond the time scheduled and most felt that the meeting was extremely informative.

Friday afternoon the Senate was set to vote on an amendment to S.10 which did not include either provision AGC/VT had requested. Shortly prior to their meeting an email was sent to each Senator outlining the results from the forum and opposing passage of the bill. It was a very passionate debate and at the end I don't believe anyone knew how the vote would come down... Possibly by luck the years first thunderstorm ran through Vermont knocking out power forcing the Senate to adjourn until Tuesday without a vote!!!!