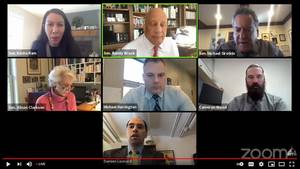 The week of 3/15 was crossover week for money bills and one bill was the main focus of the business community: S.10. As we all were aware the massive layoffs due to COVID-19 have eaten up almost $300 million out of the unemployment trust fund. This has triggered an automatic rate changed schedule to take place in the beginning of FY2022. Employers with the lowest experience rating will see their rates triple and those with the highest experience ratings like seasonal businesses including construction will see a 60% increase if nothing is done.

The Senate Economic Development committee introduced S.10 which was intended to relieve employers from the rate shock coming in July. The committee resolved to delay the rate increases by one year then gradually increase over coming years. One major challenge however is that the trust fund which had been targeted at $500 million now had a target of $1 billion because its based on the worst year ten year period and 2020 was much worse than the 2008 recession. This makes rate delaying the rate more complex because there will be costs shocks in future years with no idea what the economy will look like.

Exasberbating the issue the Senate committee decided that if they were giving a benefit to the employer than the unemployed benefits should also increase. To be fair, employers are not getting any benefit by deferring payments for a higher rate in 2023-2026 as the committee is suggesting. They are seeking to add an increase of 20% UI Payments for one year and the bill includes a $50 child benefit which would be permanent. The two proposals costs almost $50 million per year which again would void any rate relief in downyears.

Below is a fact sheet that AGC/VT along with multiple trade associations and chambers of commerce has been compiling to educate the business community. The facts are simple: under the Federal UI benefit expansions most people up to $60,000 are bringing in either 100% or more of their weekly income and adding benefits at the state level is unnessary. We will address this in a special unemployment forum at our legislative day on Thursday 3/25 at 4pm with Vermont DOL, House Commerce Committee members, and one member of Senate Economic Development Committee (2 other had scheduling conflicts). To register and attend legislative day click here.  You can find your legislator and tell them not to increase benefits and find real rate relief by ignoring 2020 when calculating the trust fund goal by visiting: https://legislature.vermont.gov/people/

Overview of S.10 and Its Changes to the Unemployment System

What is the UI Trust Fund and How Does it Work?
● The Unemployment Insurance (UI) Trust Fund is an employer-sponsored program that provides wage replacement for
employees no longer employed by a business owner under certainconditions.

Employers pay into the fund based on four variables;
● Tax Rate Schedules – the rate needed to maintain the overall health of the Trust Fund; currently at Schedule-1.
● Taxable wage base – the amount of an employee’s wages taxable; currently the first $14,100 are taxable.
● Rate Class – their historical usage of the program by an employer based on their benefit ratio (see below); hence different employer to
employer.
● Benefit ratio – the total amount of benefits charged in the last year (or
three years) divided by the total taxable wages.

Program Misconceptions
● The cost of the program is NOT shared between employers and employees; the tax is only assessed on employers.
● Limiting a rate schedule is NOT a gift or handout to employers, it is simply adjusting the pace at which they reach their target.
● Employers are NOT responsible for the increased use of the UI Trust Fund in 2020. Unlike any other recession’s use of the UI Trust Fund, the usage during 2020 has been
as a direct result of government orders closing businesses.
● The so-called “grand bargain” in 2010 was a set of tax increases and temporary benefit changes to share the pain of restoring the UI Trust Fund. S.10 is NOT a continuation of
the grand bargain as during this crisis benefits have not been reduced -- indeed, eligibility has been expanded and significant federal payments added to state benefits.

It does some good things;
● Pause the rate schedule increases in the coming benefit year.
● Limit the rate increase in the 2022 benefit year to only rate schedule-3, rather than schedule-5.
● Provides universal experience rating relief to employers who had employees leave due to reasons allowable under Act 91 .
The good provisions come at no cost to state funds or UI recipients, they are merely an expansion on the terms of payments made by business owners.

It also does some negative things;
● Increasing the weekly benefit formula by approximately 20% and the maximum weekly benefit by 20% from July 2021 to July 2022.
● Adding a dependency benefit of $50 on top of a claimant’s benefit if they claim a dependent on their taxes. This would start July 2021 and continue permanently.

What Makes the Items in S.10 Negative for Business Owners?
● The marginal benefit of increasing benefits with state funds is very small compared to what the federal government is providing; yet the marginal impact on
employers is very high.

○ The federal government made UI benefits more generous under the recently passed American Rescue Plan Act (ARPA).
■ $300 additional benefit for all UI claimants
■ The first $10,200 of UI benefits are tax-free
■ 100% COBRA coverage for those on UI ○ ARPA also extends a great deal of help to all individuals on and off UI;
■ $1,400 direct payments; $1,400 additional payments for each dependent. It is expected 89% of Vermonters will receive cumulatively $731 million.
■ An increase in the Child Tax Credit of up to $3,600
■ An increase in the Earned Income Tax Credit

○ The amount of pain and difficulty the increase in state benefits causes (upwards of $72 million) compared to the amount of assistance it can provide to
Vermonters make this benefit negligible.
● This will make rehiring difficult as we try to recover.

○ Last summer, it was well documented, and universally understood by all, that the enhanced UI benefits disincentivized people to seek out work. This proposal is
set to take effect at a time when we will be emerging from the pandemic, with business owners seeking new employees.
● It “digs a deeper hole” when the conversation should be about setting a pace to get out of it.

○ When you are in a hole, the answer is to stop digging and start deciding how best to get out. This legislation effectively decided to dig deeper before trying to set a
sustainable pace to climb out of the hole.
● It creates a brand new benefit without pre-funding it or taking testimony.

○ The Senate Economic Development Committee created the dependency benefit without any testimony at all.
○ Rather than making adjustments to existing UI benefits to accommodate a dependent benefit, this new benefit and its costs were simply added on to
Vermont’s existing benefits and costs.