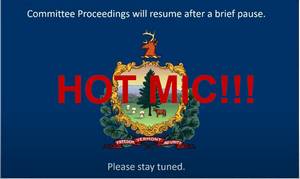 The first week of February carried with it the distraction of two controversial situations. First was a data breach by the Vermont Department of Labor. A major error occurred in the distribution of 1099s for people in the unemployment insurance programs. The error involved mixing data in printing. Addresses, social security numbers and personally identifiable information was mixed up causing people to receive others information or a mix of incorrect information on their forms. Many of the mailings never reached mailboxes due to the incorrect nature of the information in the addresses. VTDOL and the Governors administration are working their way through multiple legislative committees explaining the issue and have begun aggressively seeking solutions and protections for Vermonters. A new deputy commissioner was installed specifically to deal with the data breach.

The second controversial situation may have significant impacts on how people and advocates can participate in remote Zoom legislative meetings. During a break of the Senate Transportation committee one of the attendees who is a consultant for VTRANS didn't realize his microphone was still on. It was during this break that he appeared to be reading some news and became visibly agitated. He then uttered several phrases which included something about "saying anything to get elected" followed by some racial slurs. Although the committee was on break legislative assistants picked up on the gaffe and reported it to the legislators. Senate Pro Tem, Becca Balint immediately rebuked the witnesses statements and shared her concern about the ability for the public to testify in those committees in a safe manner for viewers. This is a concern due to the challenges advocates are already experiencing in legislator engagement due to the remote meetings. The "hot mic" witness was immediately terminated by their employer.

The Senate Committee on Economic Development was supposed to spend time on bill S.10 but spent the majority of their time discussing the data breach with the VTDOL representatives. S.10 is a bill which would extend certain provisions of the COVID unemployment including a temporary relief from UI experience ratings. Several drafts and edits are floating around and some discussion did occur. Some of the changes they are considering include an employer having to show that they've either rehired, offered to rehire, or are still closed due to COVID to have the experience rating relief. The bill is likely to pass with some changes and additions.

On Wednesday, VTRANS met with House Transportation to review their highway safety budget. The budget include various financing for law enforcement and education arms to train good drivers. Project Roadsafe, a program administered by AGC/VT, was also part of the budget and is level funded from last year. VTRANS also met with Senate Transportation to review a study on several commercial vehicle permitting issues. One that AGC/VT has been following relates to ending the use of town municipal overweight permits. AGC/VT, VT Truck and Bus Association and Vermont Fuel Dealers all testified last year about the challenges faced with the antiquated permit system and the legislature asked for the study. Vermonts DMV completed a study showing that it would cost over 3 billion dollars to improve town roads to meet the 80,000 spec on state highways and they explained that towns value these permits as they use them to direct trucks to proper routes. The committee questioned whether the towns do actually direct trucks (with few exceptions) or monitor the trucks who operate on an annual permit.  AGC/VT will continue to advocate for a logical permitting system.

If you have any questions or would like to join the Government Affairs Committee please contact matt@agcvt.org.