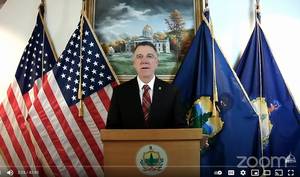 We have now finished the first month of the new session and there are policy proposals, a new executive order regarding Act 250 and the Governors budget address to report. The committees seem to have settled in and are new members are becoming acclimated with their surroundings. During the ramp up to engaging committee work business groups have continued to message legislative and statewide leaders regarding the need to focus solely on the physical and economic recoveries from COVID-19. This week an Op Ed written by the Lake Champlain Chamber of Commerce compared our economy and businesses to being stewards of our environment. It was a great piece that accurately described that we need to foster our economy in order to stay healthy.

The Governors budget address included no new taxes or fees and focused on recovering our fragile economy. The $6.83 billion budget includes almost $700 million for roads, bridges and other transportation projects, $123 million over two years for state capital construction, and makes use of one time Federal COVID funds. The agencies then spent most of the week having broader discussions with committees sharing the transportation budgets and capital budgets discussing different projects planned. Another noteworthy mention this week regarding state budgeting was a suggestion from state treasurer Beth Pearce that significant cuts are made to new state employee retirement packages. Many from the treasurers own party rebuked the suggestion.

Governor Scott also issued an executive order changing the way the Act 250 process and commissions are structured using an early season administrative privilege allowing a governor to create efficiencies in government. Without surprise the legislature immediately opposed the measure questioning the motive of the action. There is also debate about how the process of approving or disapproving the order should go. Some believe that only the Senate must object to render the order void, but others believe both bodies must agree to disapprove of the order which the courts may ultimately decide. AGC/VT was one if not the only group to be invited to testify in support of the governors order. AGC/VT testified in support of the changes which include a professional statewide board which would handle the major Act 250 applications and the 9 local district commissions would still hear minor cases. The Senate committee on Natural Resources has advanced a resolution disapproving the order which will be on the Senate floor the first week of February.

With much of the weeks timet taken up reviewing the fine points of the state budget proposal few bills relevant to construction were heard. S.10 which would extend certain unemployment provisions including a moratorium on employers experience points due to COVID layoffs and the extension of the work search exemption due to COVID. Having only taken brief testimony more will be in from advocates for labor and business soon. AGC/VT did have the opportunity to lay the groundwork for those discussions and the UI trust fund rate triggers in testimony early in the week in the House Commerce Committee. There Matt Musgrave introduced new members of the committee to the associations interests and talked about goals for this and next biennium.

Should you have any questions about bills in process or would like to join the government affairs committee please contact matt@agcvt.org