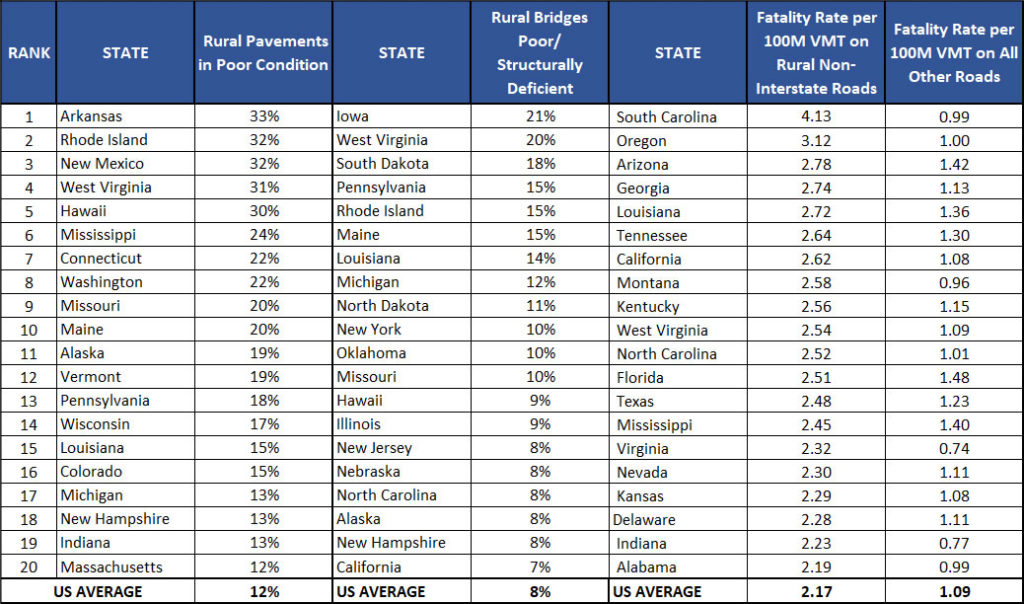 Roads, highways, rails and bridges in the nation’s rural areas face a number of significant challenges: they lack adequate capacity; they fail to provide needed levels of connectivity to many communities; and, they cannot adequately support growing freight travel in many corridors. Rural roads and bridges have significant deficiencies and deterioration, they lack many desirable safety features, and rural non-Interstate roads experience fatal traffic crashes at a rate far higher than all other roads and highways.

The chart below ranks states based on their rate of rural pavements in poor condition, share of rural bridges that are rated poor/structurally deficient, and fatality rates on non-Interstate, rural roads.

America’s rural transportation system provides the first and last link in the supply chain from farm to market, connects manufacturers to their customers, supports the tourism industry, and enables the production of energy, food and fiber. Rural Americans are more reliant on the quality of their transportation system than their urban counterparts, with vehicle travel in rural communities averaging approximately 50 percent higher than in urban communities.

TRIP’s report finds that the nation’s rural roads and bridges have significant deficiencies. Twelve percent of U.S. rural roads are rated in poor condition, while 19 percent are in mediocre condition. Seventeen percent of the nation’s rural roads are in fair condition and the remaining 51 percent are in good condition. Eight percent of the nation’s rural bridges are rated in poor/structurally deficient condition, meaning there is significant deterioration to the major components of the bridge. Poor/structurally deficient bridges are often posted for lower weight or closed to traffic, restricting or redirecting large vehicles, including agricultural equipment, commercial trucks, school buses and emergency services vehicles. Forty-eight percent of rural bridges are rated fair. A fair rating indicates that a bridge’s structural elements are sound but minor deterioration has occurred to the bridge’s deck, substructure or superstructure. The remaining 44 percent of rural bridges are rated in good condition.

The TRIP report finds that traffic crashes and fatalities on rural non-Interstate roads are disproportionately high, occurring at a rate double than on all other roads. In 2020, non-Interstate rural roads had a traffic fatality rate of 2.17 deaths for every 100 million vehicle miles of travel (VMT), compared to a fatality rate on all other roads of 1.09. While the nation’s rural non-Interstate roads carried 23 percent of all vehicle travel in 2020, 38 percent of fatalities occurred on these roads. Rural roads are more likely to have narrow lanes, limited shoulders, sharp curves, exposed hazards, pavement drop-offs, steep slopes and limited clear zones along roadsides.

“Roadway safety countermeasures like median cable barriers, rumble strips and guardrails are among the most cost-effective ways to prevent traffic crashes and to save lives when they do happen,” said AAA traffic safety advocacy & research director, Jake Nelson. “At a time when our nation is recording record high traffic deaths, transportation investments ought to prioritize curbing traffic injuries where we can make the greatest impact—rural roads.”

Signed into law in November 2021, the Infrastructure Investment and Jobs Act (IIJA) will provide a significant boost in federal investment in roads, bridges and transit and offers an opportunity for the nation to make progress in improving the safety, reliability and condition of America’s transportation system.  The IIJA will provide $454 billion over the five-year period from 2022 to 2026 for investment in highways and transit, resulting in a 38 percent increase in federal investment in 2022. The IIJA includes a $2 billion Rural Surface Transportation Grant Program that will support projects to improve and expand the surface transportation infrastructure in rural areas to increase connectivity, improve the safety and reliability of the movement of people and freight, and generate regional economic growth and improve quality of life.

“Farmers and ranchers depend on rural roads, highways and bridges to bring critical inputs like fertilizer and feed onto the farm and to move their products to market,” said Zippy Duvall, president of the American Farm Bureau Federation. “As recent supply chain challenges have highlighted, transportation delays and costs take a bite out of our profitability and competitiveness and impact the quality of rural life.  Enactment of the IIJA will provide a significant boost to federal investment in roads and bridges and offers an opportunity to improve the safety, reliability and condition of America’s transportation system.”

“A reliable, safe, and well-connected transportation network is critical for American businesses, farmers and producers to reach important markets for their goods and to ensure the continued support and strengthening of our nation’s economy,” said John Drake, vice president for transportation, infrastructure, supply chain policy at the U.S. Chamber of Commerce. “The significant boost in federal investments to our highways, bridges, and ports provided by the IIJA will be vital for these Americans’ ability to remain competitive in the global marketplace while providing much needed improvements to our nation’s transportation system.”