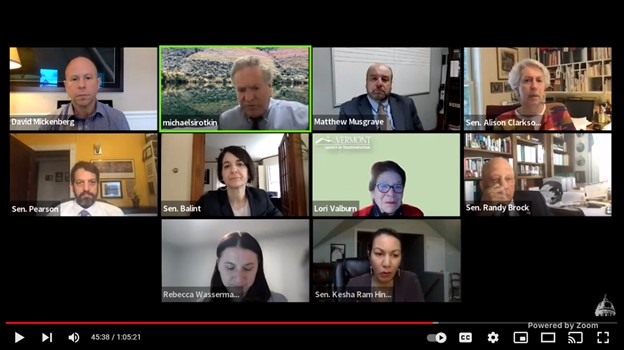 The Vermont General Assembly is successfully moving forward with policy again this week despite challenges due to a hybrid meeting format. The Senate continues to meet fully virtual, and the House is meeting in person but allowing individuals with a COVID fear to work remotely via Zoom. Although technically allowed in the building the public and advocates are not present in the building with few exceptions.

Senate Transportation took testimony from VTRANs about the lighted stop/go paddle pilot program which had its first of 2 seasons of testing. The pilot program was created in the committee as members had seen them used in the field and believed they were a positive step to work zone safety for flaggers and workers. The results from VTRANs showed that although there were minimal increases in visibility the products themselves added a burden to staff using them. The batteries needed to be replaced 3 times per day in the model used which is a burden and some were damaged in use. AGC/VT has been invited to provide input about the program. AGC/VTs current position is to oppose mandatory use of the lighted paddles, “Asking the flaggers to pick up one more responsibility without the travelling public held accountable for violating traffic laws will not improve safety”, Matt Musgrave stated in the committee in prior testimony.

A bill that would require users of toxic chemicals to provide life of victim medical monitoring which has been in play for years and has been vetoed in the past resurfaced last week. Business groups including AGC/VT largely stayed out of debate because many changes were made to the bill. The bill has now passed out of the Senate and is heading to the House for approval. Governor Phil Scott has and is on record opposing the bill and many wonder if another veto will meet passage of this version.

AGC/VT testified this week on a last-minute request in the Senate Economic Development Committee. Senator Pearson from Chittenden County introduced an amendment to the 2022 Capital Budget Adjustment Act that would require the Vermont Prevailing Wage to apply to projects over $200,000 which were funded by the Federal American Rescue Plan funds. Past emergency funds had been treated the same way by Vermont and AGC/VT was invited to give feedback on the mandate. Matt Musgrave reported that AGC/VT members are either used to working with Davis Bacon Wage Reporting for road projects and working with prevailing wage with Vermont’s capital projects. Matt explained that AGC/VT members were fully professional contractors with years of experience working with the state and win most of the bids so compliance should not be a factor. Matt did raise two negative points to the program: first was that since money is finite that if those wages were required on projects that the mandate may result in fewer projects being completed with the same money and that smaller less established contractors would have a harder time competing with AGC/VT members. The motion passed out of committee and is scheduled for debate on the Senate floor Tuesday, February 7th.