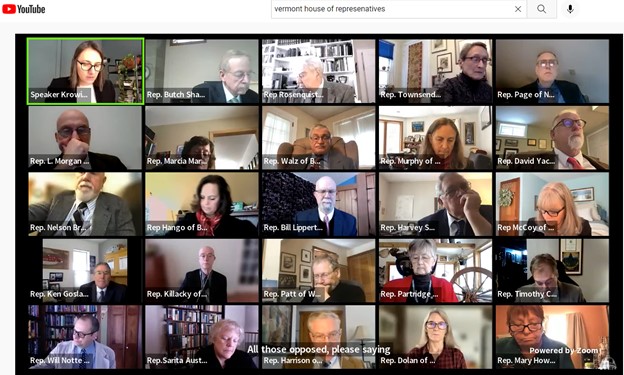 Its week four of the 2022 legislative session and legislators are busy in committees trying to craft bills in time to make crossover which is only a month away. Crossover is the time that bills need to be passed out of either the Senate or House to got to the opposite side for approval prior to landing on the Governors desk. This week much of the time was spent in Transportation and Institution committees reviewing the Governors budget requests presented last week.

The House Natural Resources Fish and Wildlife committee is hard at work on several bill of interest to AGC/VT members related to water quality. One bill H.466 which was originally intended to deal with inter- water basin transfers of water but also includes regulation of surface water in Vermont which includes streams, rivers, ponds and lakes. The bill seeks to regulate businesses that withdraw more than 5000 gallons of water per day from those sources with a reporting requirement which turns into permitting in 2026. AGC/VT is currently surveying membership to see what impact the bill would have and plans to address it with the Senate Natural Resources committee. Another water quality bill would require excavators working on shorelines to have present a person who is certified in fluvial erosion. AGC/VT is currently opposing the additional layer of oversight due to several other duplicative regulations.

The toxic medical monitoring bill which aims to provide lifetime health monitoring for people exposed to hazardous substances has resurfaced. The original bill was referred to as the “windex bill” as it would allow people to sue for medical monitoring for exposures to almost any substance. The bill which aims to right the wrongs caused by Saint Gobains PFAS pollution that contaminated Bennington’s water supply has been changed drastically from the “windex bill”. The current draft in S.113 has six important thresholds someone would have to prove to take action including “tortuous conduct” which means the defendant would have to act outside the law to commence suit. AGC/VT will continue to monitor this bill to ensure if it passes no onerous additions are made.

The Senate and House have decided to stay remote or in a hybrid format through the middle of February. This decision comes after two unidentified individuals tested positive for COVID at the state house and hospitalization rates remain high. The challenges of the hybrid meetings are apparent including disruptions to the House floors sessions because keeping 150 people on a Zoom meeting muted is next to impossible which causes feedback and background noise to keep interrupting important business. AGC/VTs lobbying team is working hard to stay on top of legislation and keep your interests represented.