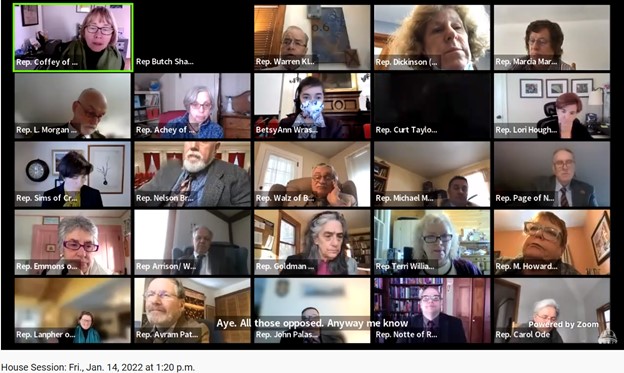 Week two was a busy one with legislative study report presentations, moving through a bill to allow municipalities to operate town and other municipal meetings with COVID protocols, and on Friday the House spent 3 hours debating a resolution to come back in a hybrid session while Omicron was still peaking. The hybrid return that was decided was that legislative committees would resume in person with the option for members who have a legitimate COVID reason for working from home could attend via Zoom and that the House floor sessions would be 100% Zoom to ensure fairness in voting and debate. Representative McCollough of Williston presented an amendment to stay 100% virtual until such time that it was safe to return but that was defeated after 3 hours of debate.

Several employment law bills that have drawn attention create obstacles for employers and employees. Two bills create an employment standard requiring "just cause" termination that would offer an opportunity for a terminated employee to act against an employer with the aid of the state if they didn’t agree with the subjective nature of the bill. It would be negative for employees too because employers would be required to do stricter background and experience checks to ensure they don’t pick up a historically bad employee. The same bills also require employers to provide a guaranteed working schedule 2 weeks prior to shifts and employees could not be sent home early or dismissed unless they agree. Another bill seeks to create wage transparency by requiring employers to advertise base wages for each job, disclose certain employees’ wages and requires a strict employee registry with race and gender data. There has also been a bill introduced to fix a problem caused by Federal unemployment insurance rules for a $25/supplemental payment during COVID as passed last year.

The worker vs independent contractor misclassification task force presented their findings in a legislative study to both the Senate Economic Development and House Commerce committees. The report showed that indeed Vermont has a historically low ratio of employee misclassification, and most were employers with less than 10 staff who just needed education. This issue has been a hot button for the Senate Economic Development committee and particularly the Chair, Michael Sirotkin. This week he also introduced a bill in response to a Vermont Supreme Court case that ruled against the state in a misclassification suit against a homebuilder on a case where the individual in question held an LLC. The bill introduced seeks to change law so that a single person LLC with no employees can no longer be hired as a sub-contractor. AGC/VT and many other business groups will oppose this proposal. AGC/VT will continue to follow another bill that seeks to do exactly the opposite of Sirotkins bill. It creates clear definitions for the distinction between an independent contractors and employee.

The House Transportation committee took testimony from VTRANS and the consultants from VHB who performed the study for work zone speed enforcement cameras. The report was well received with the objections that were expected including cost of the program and the privacy of the public. It appears from the discussion at the committee that a pilot program proposal may be introduced and receive testimony from parties including AGC/VT. We will continue to support programs that enforce safety within our workforce to protect our family of contractors!