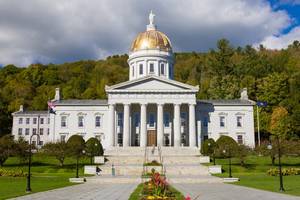 Lawmakers returned to Montpelier (virtually) this week to respond to Governor Scotts veto of three bills. Two of the bills were charter changes for Montpelier and Winooski that included a provision to allow non citizens to vote on local issues. The other bill is intended to keep certain information confidential during the arrest and changing of a juvenile. The veto session opened on Wednesday, June 23 and was expected to last either 2-10 days depending on who you were hearing from. Some believed that other issues would be taken up or revived during the session which proved to be true.

The two charter changes were widely supported during passage by Democrats and Progressives as a fair way to engage residents non citizens in the civic process. Republicans and Governor Scott opposed the measure. Governor Scotts veto message indicated that he believed it was the wrong time and wrong way to accomplish the goals set fourth in the bills. Scott suggested that rather than having a piecemeal approach with cities having different rules that a state wide approach would be better to allow more parity. Ultimately both the House and Senate voted to override the veto however it was not on a party line vote in the Senate unlike the House. Several Democratic Senators opposed the measures.

The assembly decided to not take up the veto regarding the juvenile arrest information. It was believed most of the goals of the bill were already addressed in other laws and members of the Judiciary committee were disappointed in the veto, but resolved to write a better bill next year to address the issues.

The legislature did take up a couple of other measures. The first being a registry system and oversight of Vermont rental properties. The assembly had been frustrated with growing reports of dilapidated or unsafe housing for low income Vermonters renting. The bill stands up a registry of rentals and create an oversight policy for towns to adopt. Having passed both chambers it is unclear at this point whether a veto will be issued or it will become law.

The Senate also took up H.157 which would require residential contractors who do not hold any other state license (electrician, plumbing ect) to register with the Office of Professional Regulation if they do any one project over $2500. It would also require liability insurance and written contracts for projects over $2500. The Senate passed out an amendment to the House version which reduced the threshold for registration from $3500 to $2500. It is unclear whether the House will concur or if the Governor will veto the bill if it arrives on his desk.

The assembly adjourned on the second day, Thursday, June 24 to everyones pleasure that they will not take up any other controversial bills. The leadership left the option open to return in the fall if legislation is needed to distribute and COVID recovery funds. We will update you as things happen.